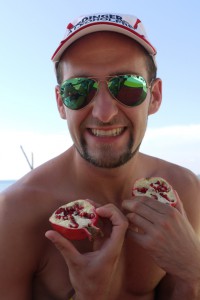 I had been playing soccer since I was a child of about 9 years with just some small interruptions. I had a lot of fun playing this sport until the 26th of  February in 2010 where I have received my first out of two tough knee injury. In a  friendly pre-season match against SV SW Lieboch I ruptured the posterior cruciate ligament (PCL) in my right knee. This made me look at this sport from a different angle for the very first time. I kept my chin up after had worked pretty hard I made my comeback on the pitch again after less than 6 months.
I felt very good and what was more important my knee felt stable…but just until the 16th of October in 2011 where I once again got fouled by an opponent. The diagnosis this time was rupture of the anterior cruciate ligament (ACL) in the right knee. Once again I tried and worked very hard by doing 10 weeks of physiotherapy to make things undone. At first I could join in my team for the preparation time for the upcoming season in spring but turned out that for too many times my knee-joint’s side-stability was not the same any more. So I decided what had to be decided: I had to do surgery at LKH Graz.
The surgery was in the morning of January 3rd 2013, almost three years after the first incident. During the intervention a tendon from my right thigh was removed and plugged-in with a technique called double-bundle as a replacement of the original anterior cruciate ligament. The compromise I agreed was that I won’t run or do any other stop-and-go sport for the next year.
After finishing my physiotherapy I started biking in my free time. In summer I pushed myself into the water for at least two times a week to do some swimming because this and biking were the only things I was allowed to do. Therefore, I decided to jump into a new adventure and challenge: “Triathlon” and started the experiment by applying to a swim course at USI Graz…the rest is history.

One thought on “About me”